This hot looking mountain chick asked him “Do you play Mandolin?”…and that was the last time I saw him.

You were a friend of Mr Brookers then, Mr Throssell?

Mr Throssell: A brief acquaintance. Yes. I was scared to get too close to him…he’s a mandolin player!

And that was the last you ever saw of him?

Mr Throssell: Yes Sir, that was the last time I saw him. He was a strange sorta guy. For starters he played the mandolin. He also ran naked past my house and scared the chickens… they haven’t laid since.

Our previous witness stated that Mr Brooker was a decent man. This sounds like a case of wrong place at the wrong time, playing the wrong instrument to the wrong woman…would you agree

Mr Throssell: Yes Sir, but in some ways he might have got lucky.

Could you elaborate to the court please Mr Throssell.

Mr Throssell: I live at the bottom of Round Mountain. I’m not sure why he was naked that afternoon, running past my house. I don’t know if he was running away or towards the mountain. The Round Mountain Girls have a chequered reputation. Most men are scared of them but some blokes like that kind of thing. He swaggered in front of my porch and then ran into the bush.

Why did he swagger so in front of your porch Mr Throssell?

Mr Throssell: Any Mandolin player will swagger Your Honour…chickens or no chickens…porch or no porch…especially when under duress or in the presence of women.

You seem to know a lot about mandolin players. Can you explain Mr Brookers obsession with the instrument.

Mr Throssell: Well, I stood next to him at a Guns n’ Roses concert when he almost died of dehydration. In his delirium he smiled and declared his love for the mandolin. He didn’t actually play a mandolin for years after, and GNR don’t have a mandolin, but it seemed like he’d made a spiritual decision.

Could you tell the court how you came to know Mr Brooker.

Mr Throssell: I was a fan of his. He was a grunge merchant originally, with a bunch called Cyberdog. God they rocked. He went into self- imposed solitary for a while and then re- emerged playing with The Occasional Blisters. They rocked bigger.

It sounds as though the world of music will be all the poorer if he has indeed been abducted.

An open verdict was recorded.

Fortunately for the world of music, Chris Brooker escaped the clutches of the Round Mountain Girls and although his swagger is all but gone, the passion for the mandolin lives on. He is not a real girl in his entirety, but it is believed that some parts of him maybe. 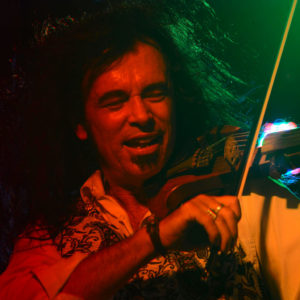 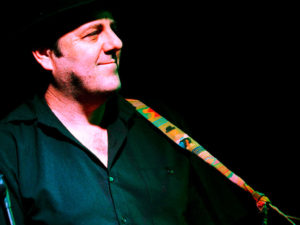 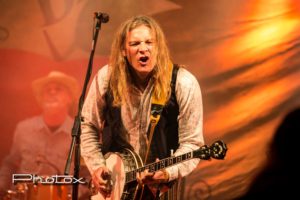