Produced by The Filmery and award winning director Duncan Toombs, the Magical Mix video is set to be released in next week. It’s a cinematic epic. The band footage shot, for the most part, on the Tweed Coast of NSW with the iconic Wollumbin (Mt Warning) in the background is an area that holds deep cultural significance for the local Bundjalung people, as well as a special place in the hearts of Round Mountain Girls. The band footage is interspersed with iconic Australian imagery as well as studio shots of John Williamson. We want to give a HUGE shout out to all the fans that sent in clips of themselves in front of their favourite places. We haven’t been able to use them all but we think it gives a great snapshot of who we are.
‘Wherever we’re from and wherever we live, it’s the land that ties us together.’ 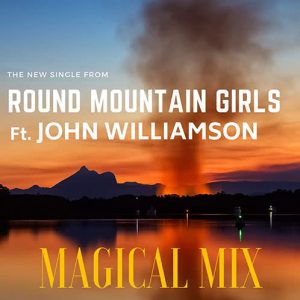